Competitive
as a peach

In 1943, Chicago Cubs owner Philip K. Wrigley started the “All American Girls Professional Baseball League” (AAGPBL) to keep an interest going in baseball while major league ball players were overseas during WWII. The real Rockford Peaches were one of four teams to begin the league, and one of only two teams to remain in their home town for all twelve years in the league. Taking the pennant for most wins in a season three times, and winning the championship four times, the Peaches had the best league record. They were considered the best team in the AAGPBL! 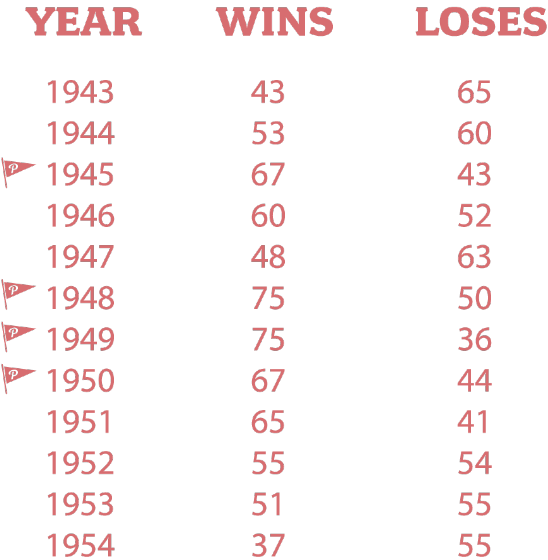 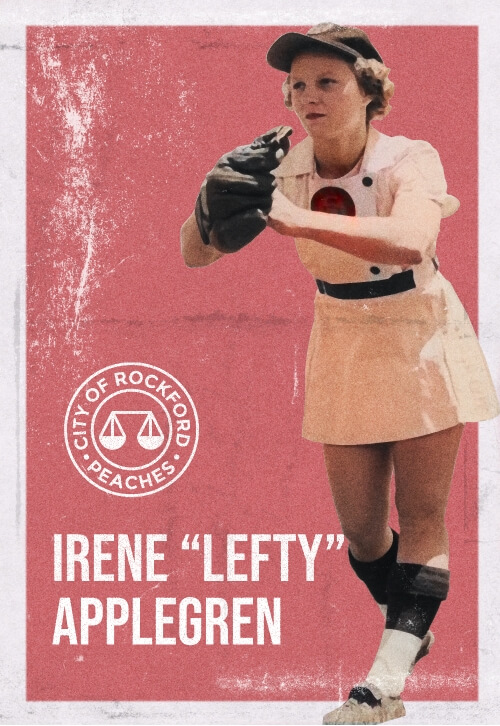 Irene “Lefty” Applegren was a Peoria, IL native who was drafted by the Rockford Peaches in 1944 before she had even finished high school. She was known for her hard underhand pitching style, but was one of few players in the league who saw the evolution through all three pitching styles, including underhand, sidearm, and overhand. Irene played on the Peaches’ 1945, 1949, and 1950 championship teams, and has a career highlight of pitching a no-hitter against the Grand Rapids Chicks on July 31, 1946. 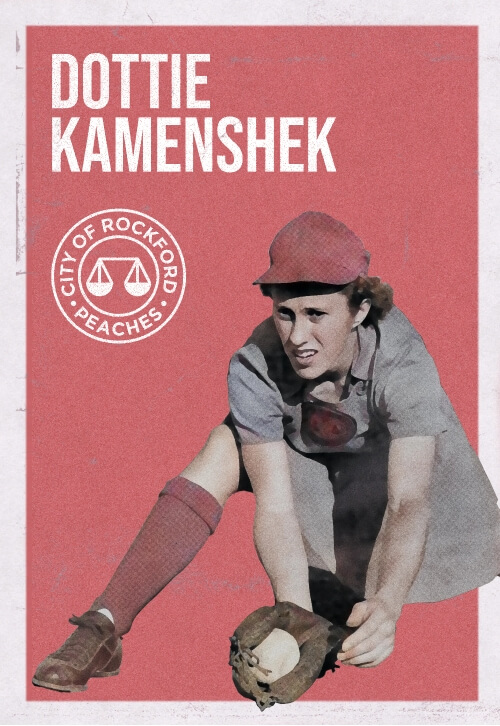 Dottie “Kammie” Kamenshek was one of the best players in the league. New York Yankee Wally Pipp called her “the fanciest-fielding first baseman I’ve ever seen, man or woman.” She would leap three or four feet and do the splits to cover first base! As a batter, she was a two-time league champion striking out only 81 times in 3,736 times at bat. In her nine year career from 1943 to 1952, she put out a record 10,440 players at first base, and was responsible for more double plays than any other league player. Dottie suffered a back injury in 1952 and became a physical therapist for the next 30 years. Dottie passed away at 84 in 2010. 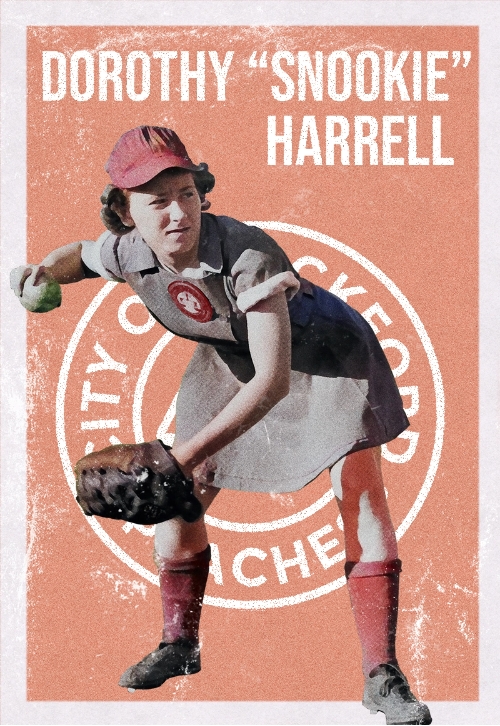 Dorothy “Snookie” Harrell made the All-Star team five times in her career as one of the best short stops in the AAGPBL. The fans loved Snookie as she was a strong slap hitter who led the league in RBIs and had only 95 strikeouts in 2,920 times at bat. She made the playoffs six times, and four times on the championship team. Harrell competed in the league from 1944 to 1952, after which she continued a career in softball, and even managed the Orange Lionettes championship team. 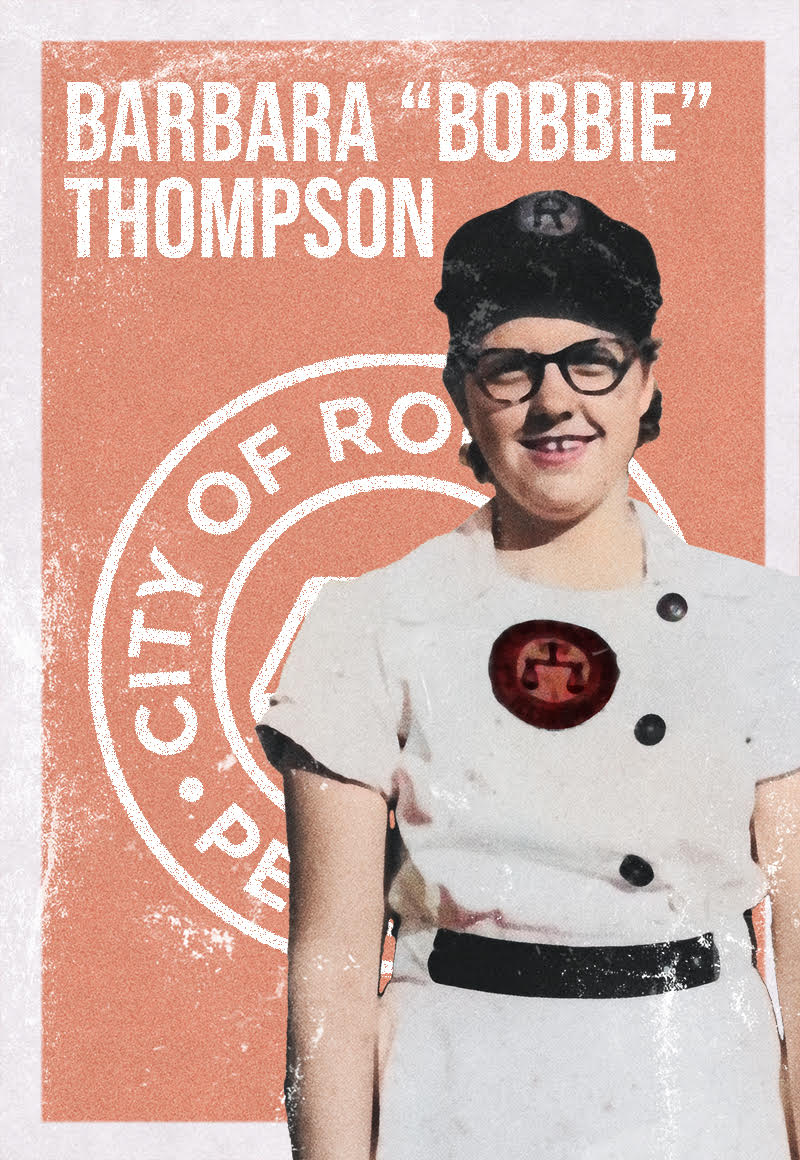 Bobbie Thompson was another Rockford native who played outfield for the Peaches in 1951 and 1952. Bobbie remained in Rockford after she retired from the league, graduating from Rockford Memorial Hospital School of Nursing and working as an RN until she retired in 1996. 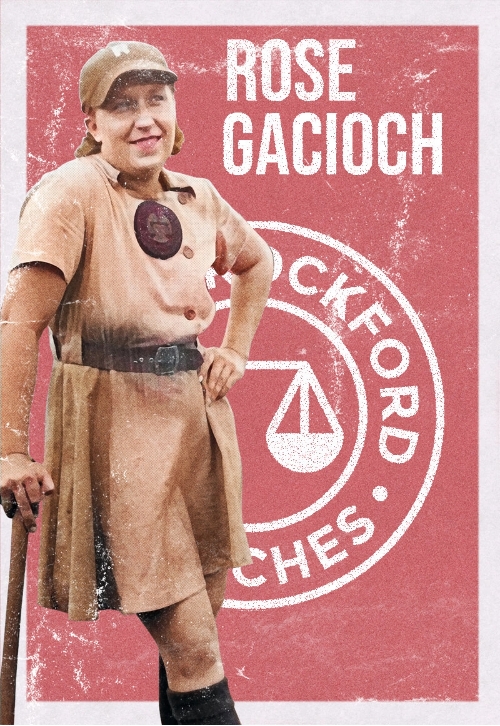 Rose "Rosie" Gacioch played in the AAGPBL from 1944 to 1954 taking on many positions including pitching, outfield, and first, second, and third base. She was a great pitcher who practiced by throwing through a hole in a mattress as a kid. Rose was a power hitter leading the league in triples and RBIs in 1945. She made the All-Star team from 1951-1954. Upon retirement, she continued living in Rockford, working as a press operator at a hardware manufacturer for the next 20 years. 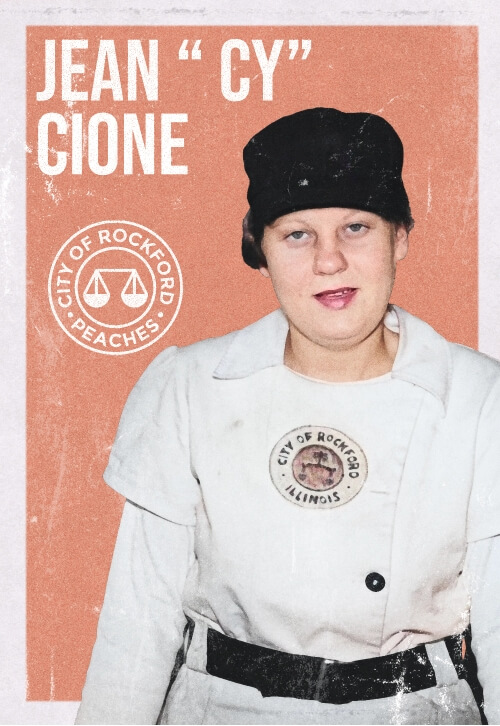 Jean “Cy” Cione was one of a few players homegrown here in Rockford, IL. She entered the league in 1945 at the age of 17 when she attended tryouts in Rockford. She made the cut and had a long ten-year career as a star pitcher which included three no-hitters, two of which were in the same month. Jean was an All-Star player with an ERA of 2.33 in 169 career games, and one of the few players to successfully transition through all three pitching styles as the league evolved from underhand to overhand. 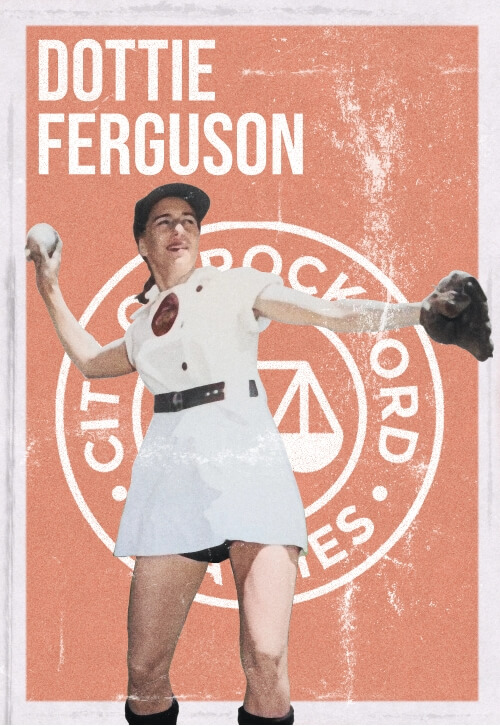 Dorothy “Dottie” Ferguson was a Peaches fan favorite. Known for her speed, she stole 461 bases in her nine-year career from 1945 to 1954. Prior to joining the Peaches, Dottie was a professional speed skating champion, which lent itself to to her strong base running. Dottie got married in 1949, but continued with the Peaches until the league ended in 1954. She remained in Rockford until she passed away in 2003.

Evolution of the game

In the beginning, it was assumed that women should be playing softball. The league started off with a 12” ball, 65 feet between bases instead of 90 feet in MLB, and the pitchers mound 20 ft closer than MLB. And, pitching began as underhand. By the league’s end, the women were playing nearly the same game as MLB with a 9” ball, distance between bags at 85’, and the pitcher’s mound only 6” shorter. Pitching evolved from underhand, to side arm, and finally overhand. These women, could play at very high levels, and fans wanted to see a faster pace competitive game as seen in MLB.

The real Rockford Peaches had five different managers over the span of the league, most of whom had successful professional baseball careers of their own.  The most notable being Bill Allington who managed the Peaches eight of the twelve seasons.  Others include former Brewers coach Edward Stumph, Edward Ainsmith who caught in the majors for fifteen years, and John Rawlings who earned three World Series rings of his own.  The Peaches were the most successful team in the AAGPBL, and this success can also be attributed to the solid lineup of managers who led the Rockford Peaches to victory! 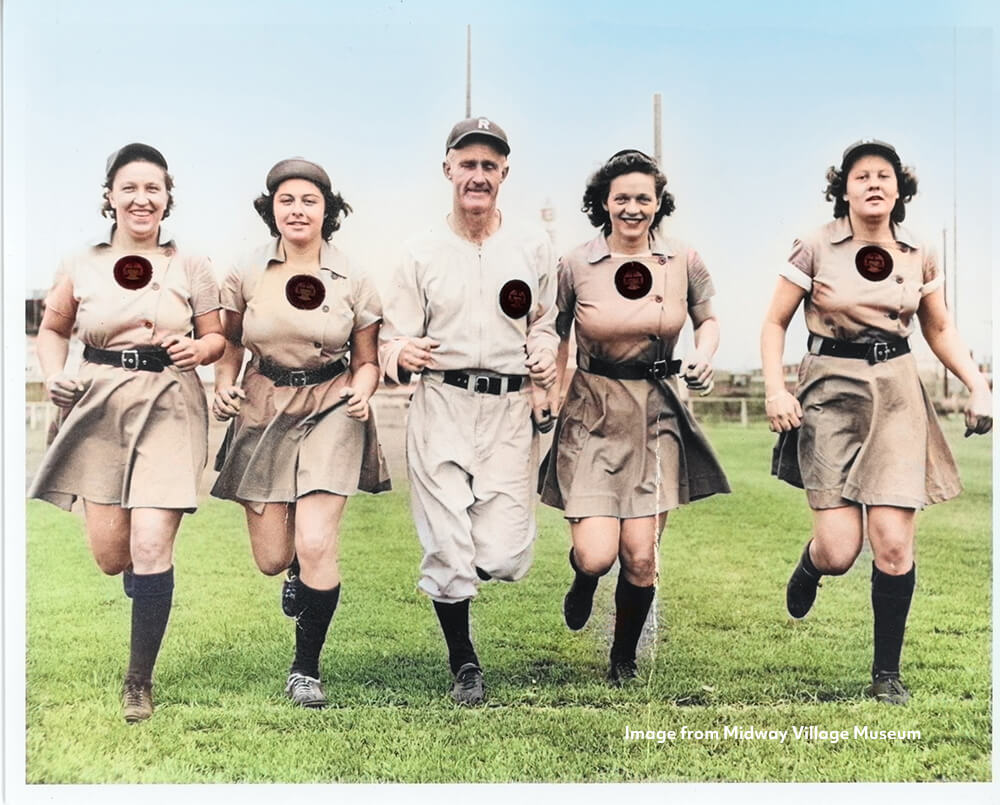 The Love of the fans

Beyer Stadium, often referred to as the “Peach Orchard” was home to the real Rockford Peaches.  46,000 fans attended home games in the first year, which doubled to 80,000 in the following year.   Loyal fans packed the stadium, which hit a peak in 1948 when an astounding 900,000 fans attended AAGPBL games!  Revenue was brought in to support the Peaches through their membership fan club as well as fundraising events and sponsorships. 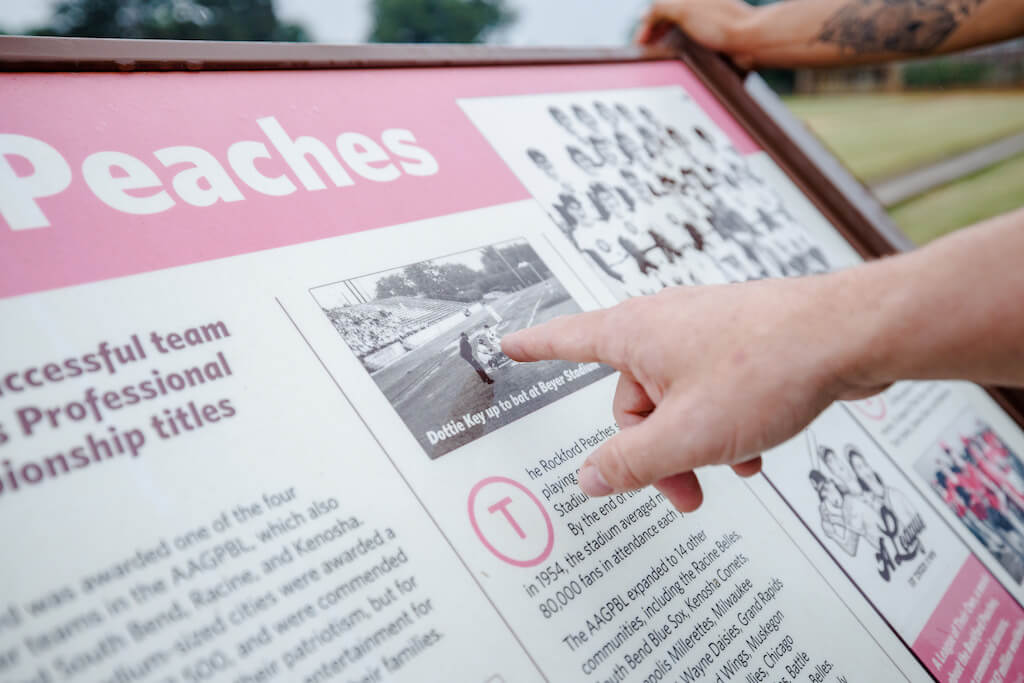 The vision of the International Women’s Baseball Center is to build #APlaceOfTheirOwn. It is a mindset, a dream of what we want baseball to be for women and girls – for everyone – around the world. And with your help, it will soon be a physical destination.
From an activities and community building serving Rockford’s Blackhawk neighborhood to a world-class museum honoring the pioneers and future stars of baseball, our vision is a shared vision. Join us on this journey!

Read about the IWBC's Vision